“With a population now exceeding 200 million, Brazil needs more houses! Lower-income families are facing a housing deficit of 8 million homes, set to grow to over 12 million by 2023. We are helping to solve their problem.”


This is how the investment prospect starts to describe the investment that I have made recently. The investment is a “social housing investment”, which I have made through Emerald Knight Consultants, an investment broker specializing in Socially Responsible & Sustainable Investments (http://www.emeraldknightconsultants.com/). The issuing company of the investment is EcoHouse Developments, an award winning property developer of social housing programme in Brazil (http://www.ecohousedevelopments.com/). “EcoHouse was founded in June 2009 and are now a global organisation with an annual turnover of 65M and offices in London, England - Natal, Brazil - Toronto, Canada - Dubai, UAE and Singapore. We have an expanding workforce of over 1040 full time employees across the globe which includes over 900 full time buildcrew onsite in Natal, Brazil.”


So what is a social housing?


‘Social housing’ is a term used for homes provided by a government for families with modest incomes. The economy of Brazil has now grown to become the 6th biggest in the world (overtaking the UK at the end of 2011) and is continuing to rise. This means that the demand for housing has of course increased. Property supply simply can’t keep up with demand and added to this millions of families in Brazil already live in sub standard housing. In 2009 the government decided to act decisively to tackle this problem. So the Minha Casa, Minha Vida social housing scheme was launched! The ‘MCMV’ scheme aims to build three million homes over a five-year period. This big investment has a government budget of around R$100 billion (approx £40 billion/US$65 billion/€ 45 billion). The first phase of Minha Casa, Minha Vida Brazil was launched in early 2009 and aimed initially to build a million houses throughout Brazil. In June 2011 the government announced the start of a second phase comprising a further two million properties.


How does the investment work?


The investment is quite simple. Private persons invest in off-plan property developments in Brazil. Once the property is built and sold to an individual in Brazil, the investor gets the invested money back. Plus a 20% interest rate - in one year!


So why did I invest in this?


There are a number of attractive reasons why I did this investment. Some of them are (not individually ranked): 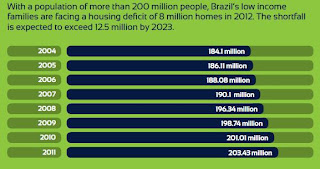 Picture above comes from the EcoHouse investment prospect


·         A proven investment. The developer is an award winning developer with offices worldwide with proven track record and identical projects already delivered on time. According to Emerald Knight, investors in EcoHouse’s previous investments have received their money back earlier than the agreed 12 months!
·         A social responsible investment. Helping to solve the housing deficit by building houses for people in need of properties with good standard
·         A relatively safe investment. The investment is backed up by the Brazilian government and protected by a Lloyds TSB Escrow facility that offers 100% security. The worst case scenario in the project is that all money is returned to the investor if the project does not go ahead for whatever reason


I will write more about this investment in later postings so you can see if this investment turned out as planned! In one of my next postings I will write about the results from an exciting investment I have made – a carbon credit investment. So stay tuned and subscribe to my blog (at the top right on my blog) - don’t miss out on more interesting stories!


(Flag-picture above from: bestflag.blogspot.se/2012/09/brazil-flag.html)
Published by: Unknown at 1:39 PM
Email ThisBlogThis!Share to TwitterShare to FacebookShare to Pinterest